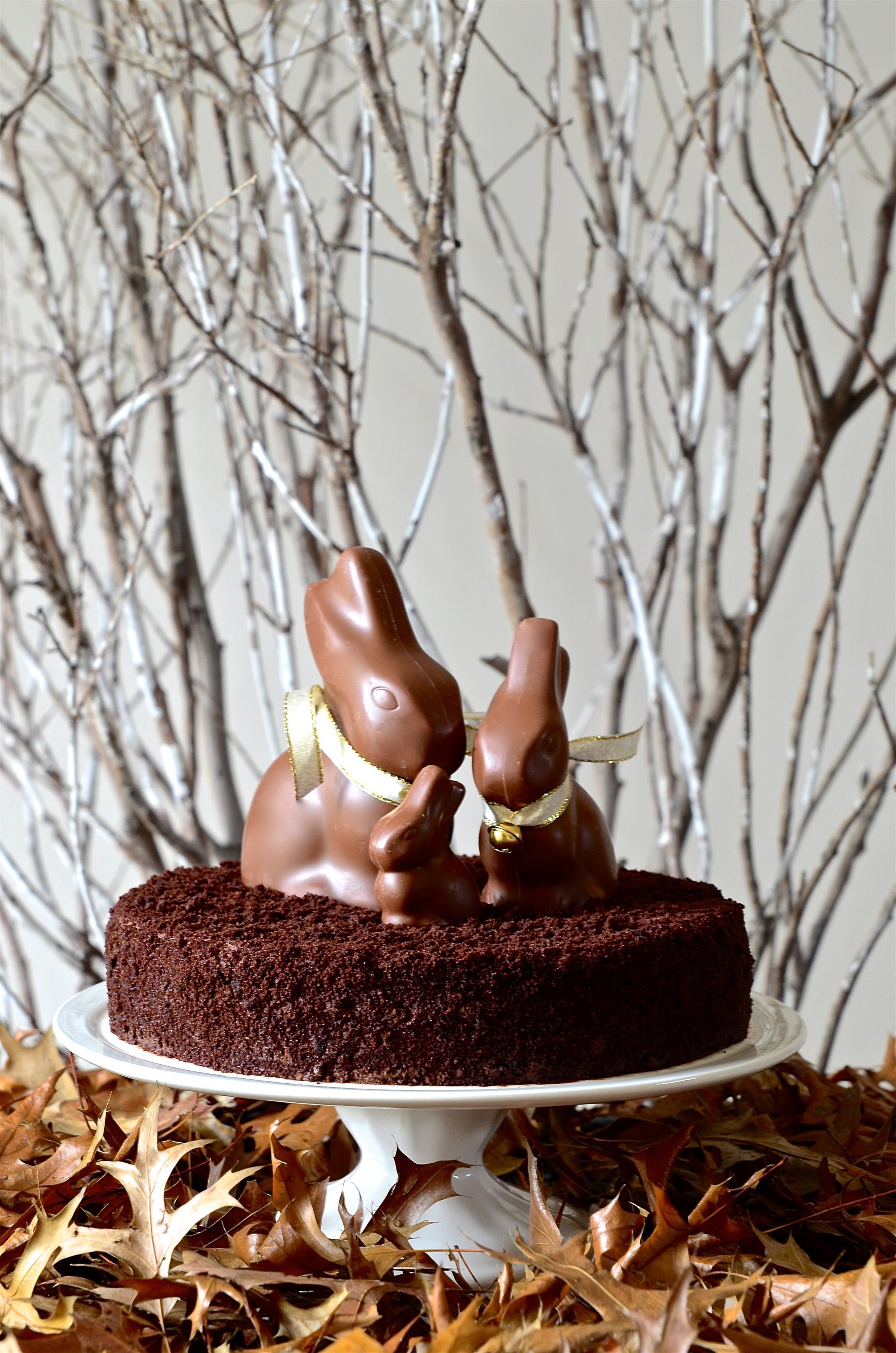 Playful, yet impressive, this Baked Nutella Chocolate Torte takes centre stage at the Easter celebration table. And what would Easter be without the ribboned Lindt bunny? The texture of this cake is unlike any cake I’ve eaten before. It’s half torte, half baked mousse and decently rich. I’ve coated the torte with a skimpy layer of chocolate frosting. This creates a stick-able surface for the crumbs adhere to. For the crumbs, I use a good old store bought chocolate muffin. If you couldn’t be bothered with the fuss, a light dusting of powdered sugar or cocoa will do the job. 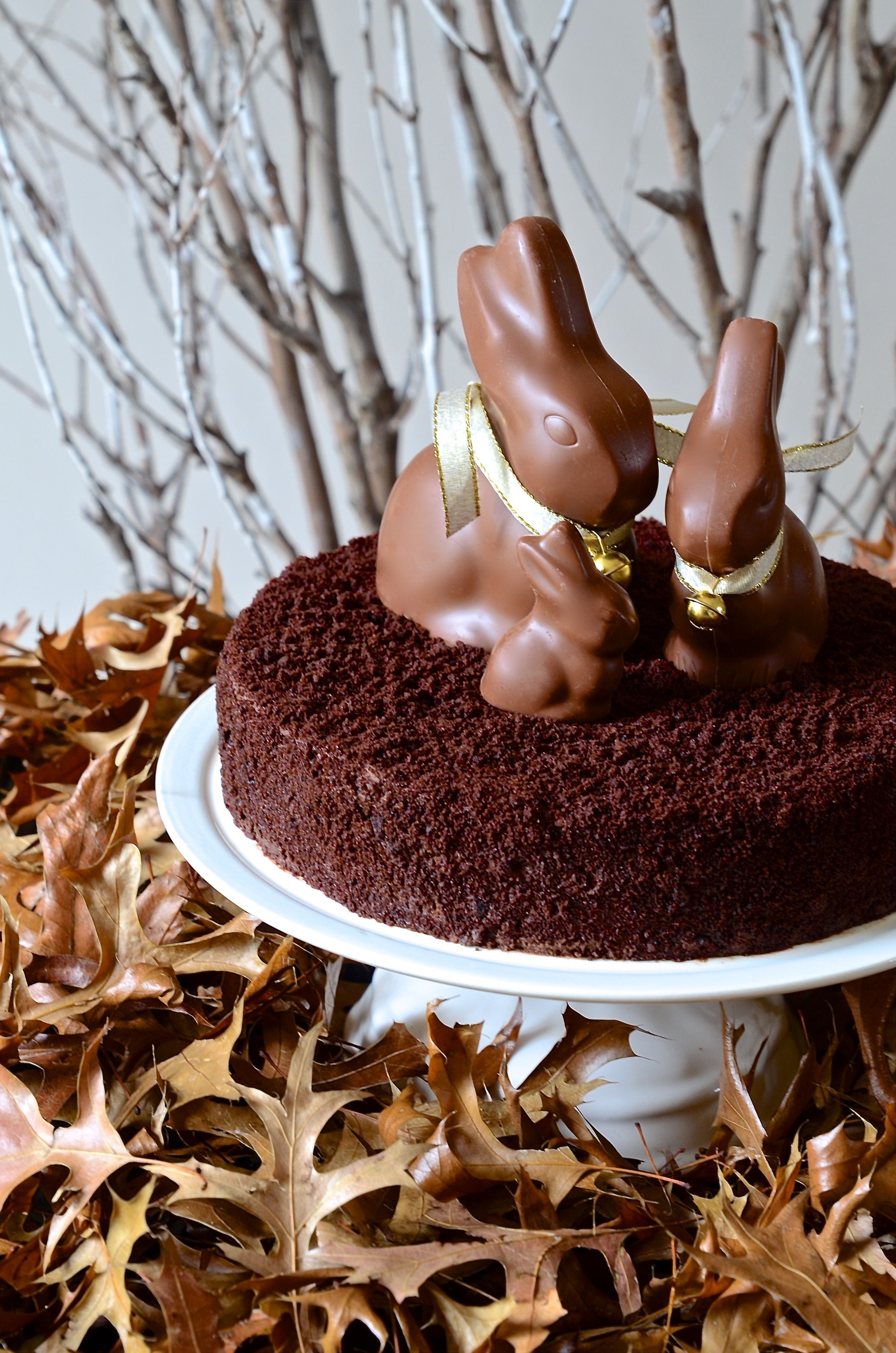 A classic torte is mostly made with ground nuts or breadcrumbs rather than flour. It yields a slightly denser texture. I’ve used flour for a lighter crumb but, if you want to make it gluten-free, ground almonds is best. So although not 100% a torte, the balance of the ingredients and method follows the torte profile. A dollop of whipped cream is all it needs. 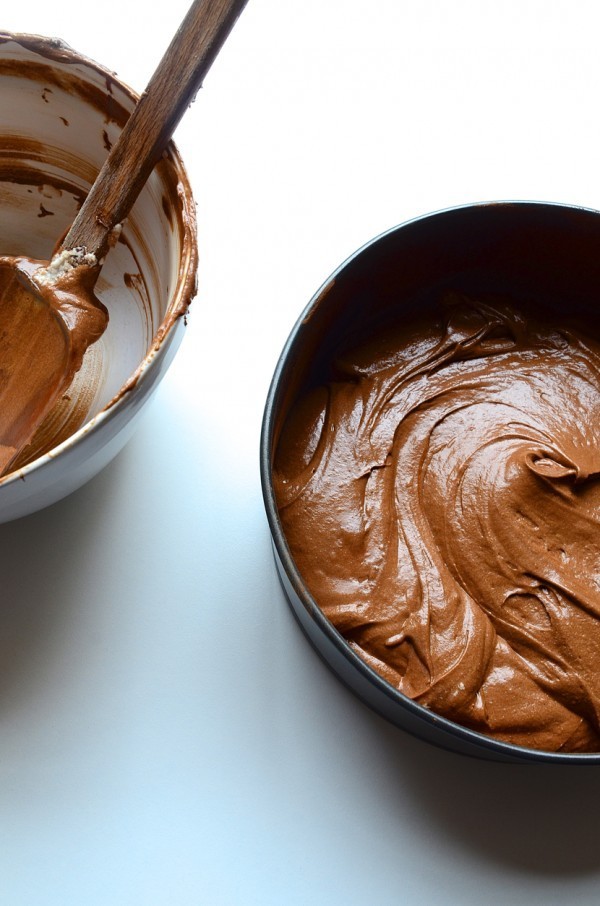 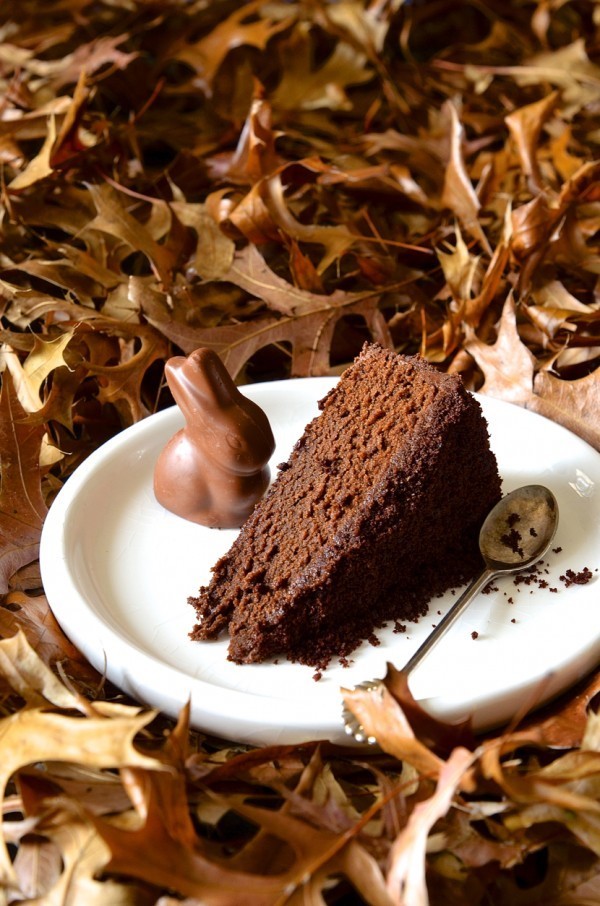 Preheat the oven to 180º C. Grease and line the base of a 22cm springform cake tin and dust the sides with flour or cocoa. Melt the chocolate over a pot of simmer water until smooth. Remove from the heat and whisk in the Nutella. Set aside.

With an electric whisk, beat the butter and castor sugar together until pale and well creamed. Add the espresso and vanilla extract. Whisk in the egg yolks, one at a time, until well combined. Fold the Nutella chocolate into the egg mixture. Sift in the flour, cocoa and salt. Fold to combine.

Whisk the 3 egg whites with a pinch of salt to form soft peaks. Add 2 tablespoons castor sugar to the whites and beat until stiff and meringue-like in texture. Fold one third of the whites into the batter to loosen it up. This can be done quite briskly. Now fold the remaining whites in, but more gently this time to keep the batter light and aerated.

Pour the mixture into the cake tin and bake for 25 minutes. Remove from the oven and allow to cool in the tin for at least 15 minutes. Run a knife carefully around the sides to loosen. Leave to cool completely.

For the chocolate frosting and cocoa crumbs

For the chocolate frosting, beat the butter until creamy and light. Sift in the confectioner’s sugar and cocoa powder. Whisk until combined. Add the cooled, melted chocolate and the milk. Mix until the chocolate is well incorporated. NB If the chocolate is not cooled to room temperature, it will seize up when added to the buttercream. Also, ensure that the butter is softened and at room temp before commencing.

To make the cocoa crumbs, whizz the muffins in a processor until fine. Spread out onto a baking sheet and bake in a 180º C oven for around 10 minutes until crisp and crunchy. Set aside to cool.