A torte is not a cake and thus, cannot be expected to behave as such. It will not, no matter how much you will it, bake with a sustainable dome or at best, even top. It rises rather impressively, then, nearing the end of the baking time, but most certainly as it cools, take a disappointing but to be expected, dip in the centre. This, in the realm of sponge cakes, would be deemed failure. No bakers badge, just a  straight out, leave the tent, ticket. If however you steady yourself for the deflation, it’s safe to say, you’re en route to a classic chocolate torte. With its meringue like crust and dense fudgy interior, this chocolate torte with triple chocolate mousse is nothing short of otherworldly. And fearlessly rich. 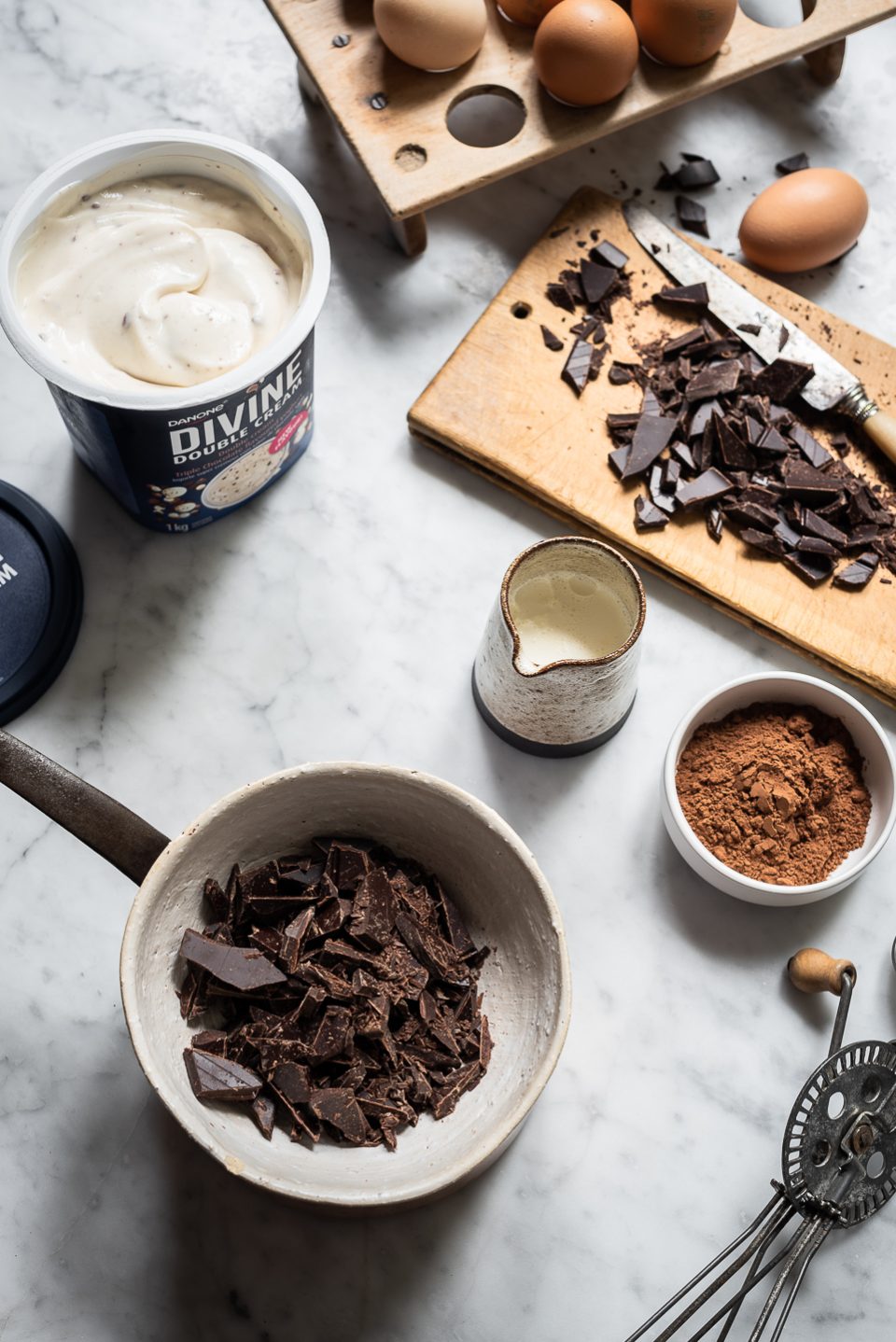 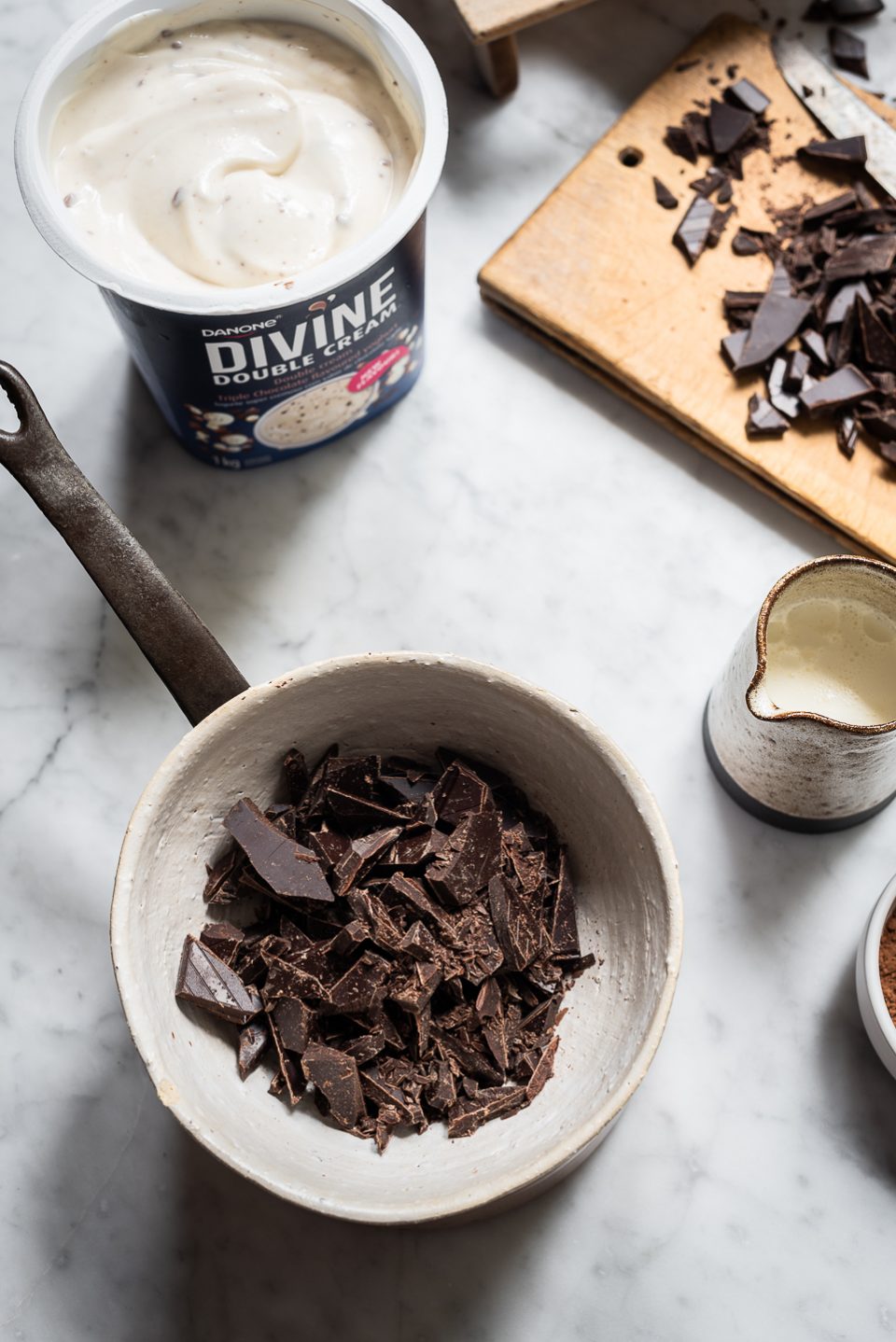 The torte is pretty straight forward, really. Good chocolate, better butter, fresh eggs. With no other raising agents other than eggs, a decent beating and gentle folding are the secret to success. For this recipe I’ve used a combination of dark and milk chocolate. Together they create a convincingly dark flavour without being cloyingly rich. Torte purists will be happy with a light dusting of cocoa, or not, a dollop of fresh cream and strong coffee alongside. Unadorned, it is already heavenly, but what say we take it up a notch? 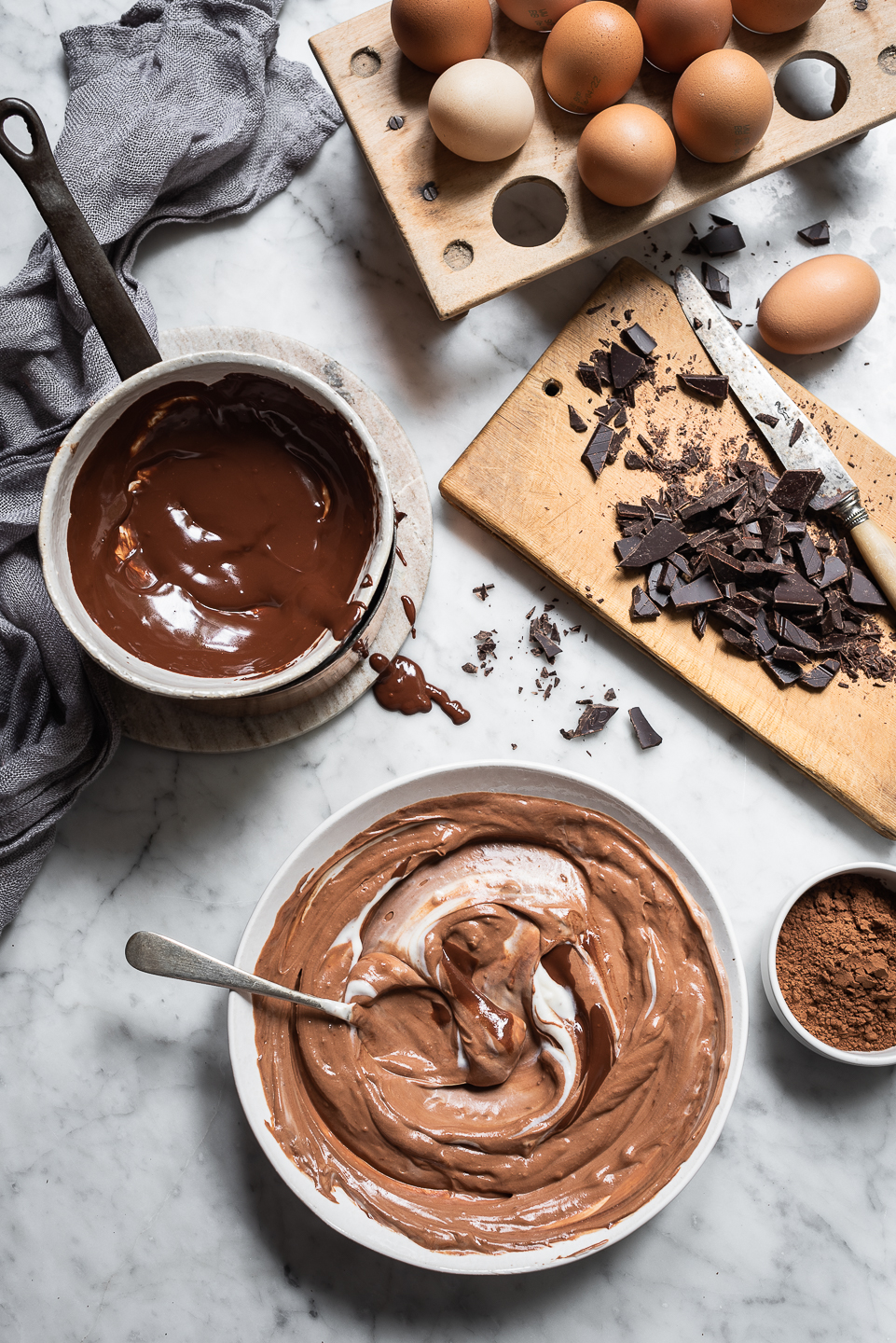 Sensory eating is about contrasts. Here, a triple chocolate yoghurt mousse is the elevator that makes this chocolate torte unforgettable. I’ve used Danone Divine’s new Triple Chocolate Flavoured Yoghurt as the mousse base. Their Double Cream yoghurt is lusciously thick with just the right amount of tang to contrast the sweet darkness of the torte. The recipe makes plenty, which in and of itself is a stroke of luck, rather than problematic. I serve any extra mousse separately in little pots as a light dessert. Some fresh berries and a drizzle of chocolate ganache is all it needs.

Cook’s Note: Refrigerate the torte for an hour to two. The flavours deepen and mellow, and the mousse sets just enough to accommodate neat slices. Best served at room temperature so remove from the fridge about 20 -30 minutes before you want to serve. Chocolate torte keeps well for several days making it an ideal make ahead dessert. 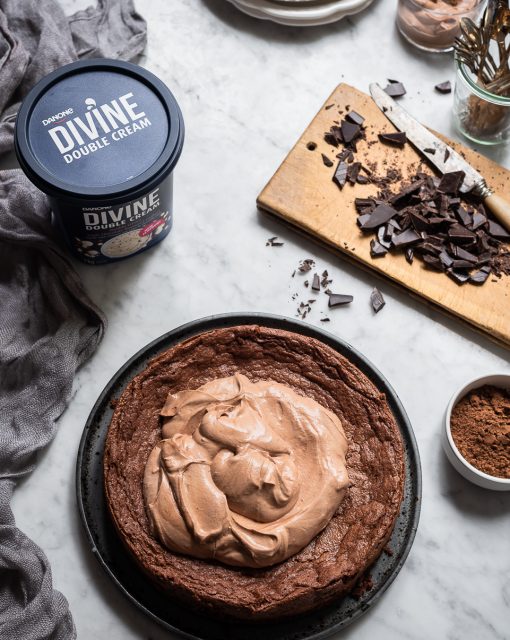 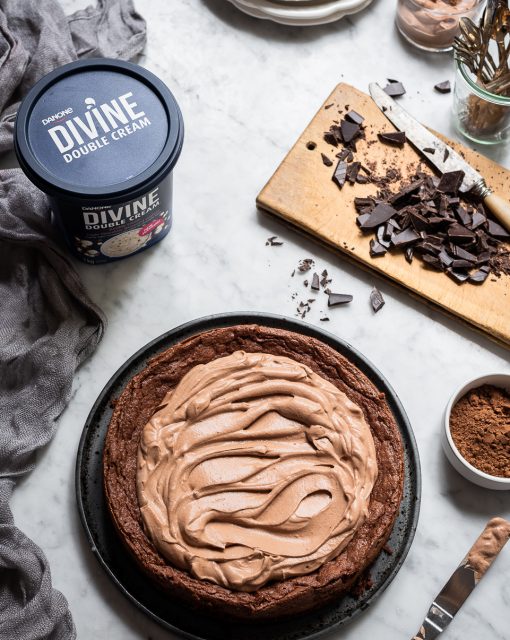 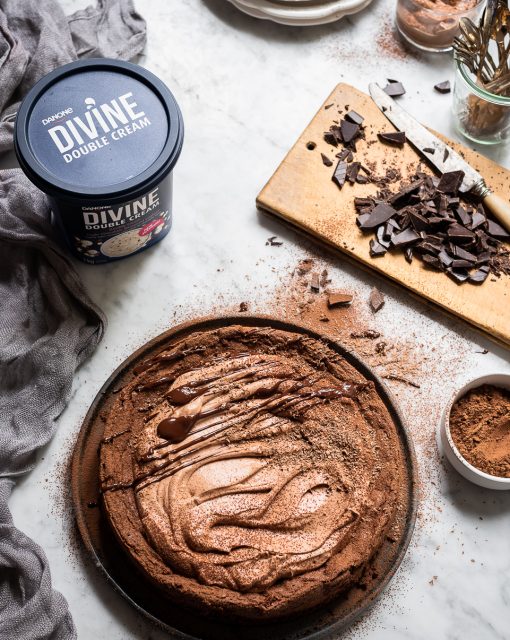 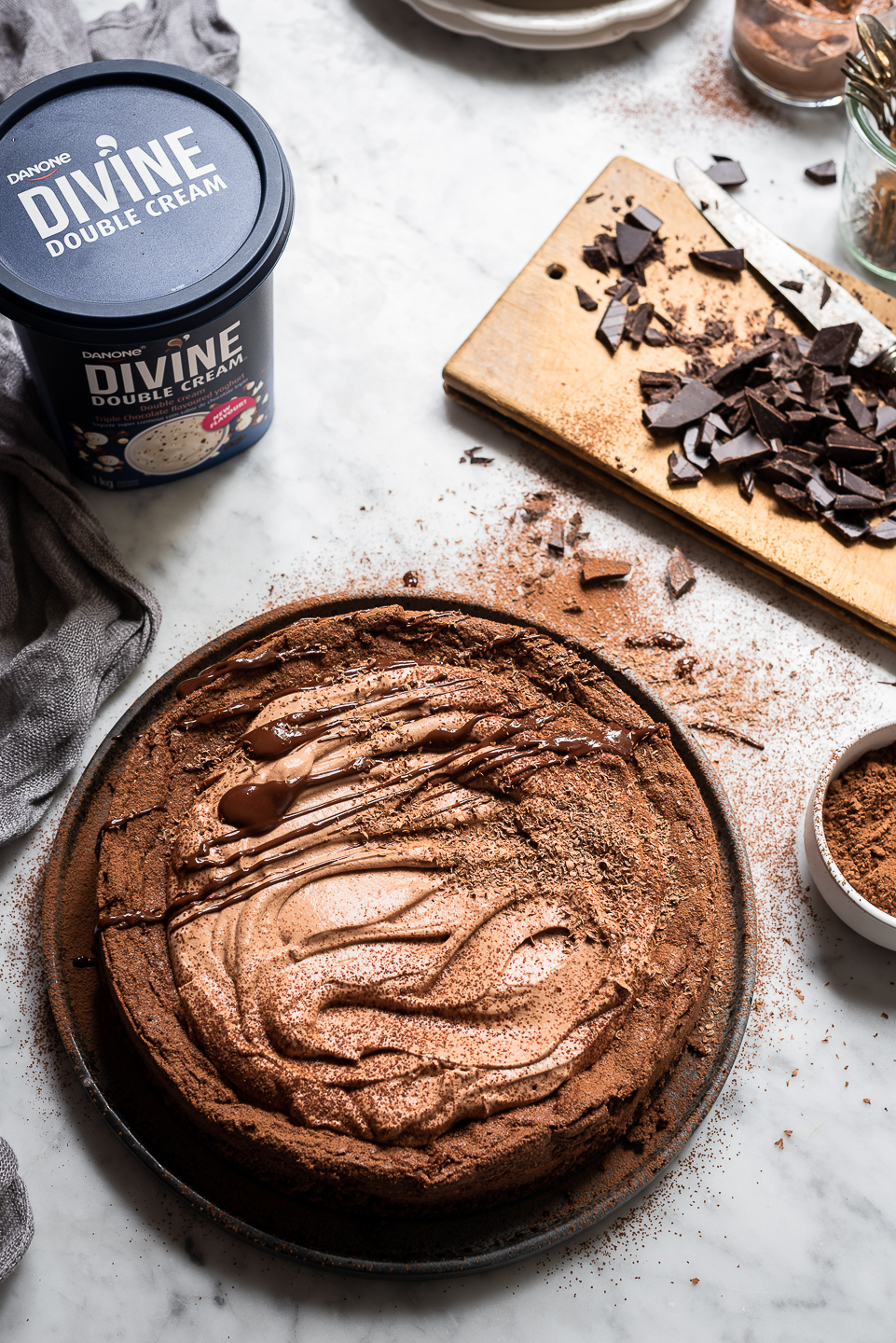 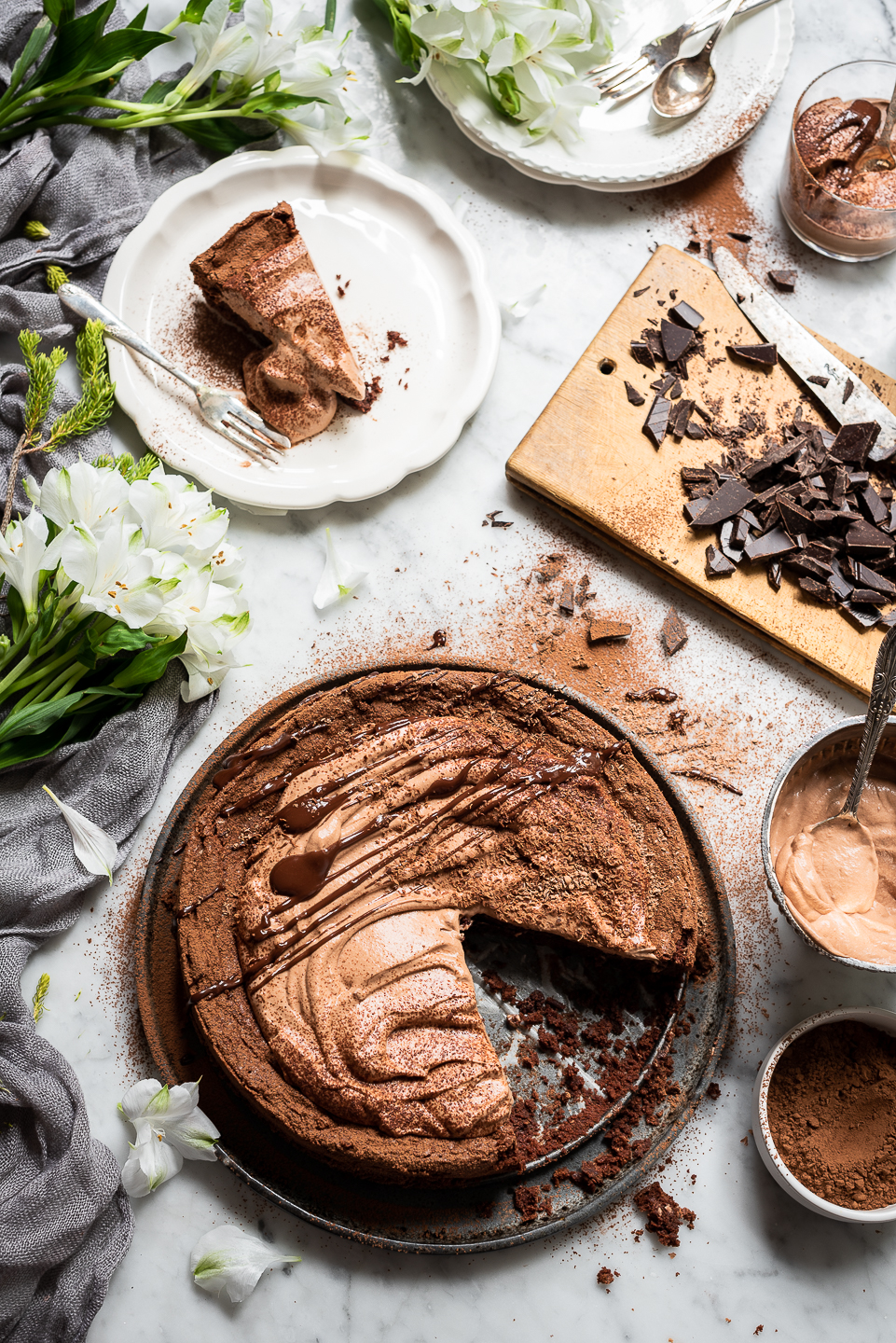 For more yoghurt inspired recipes, you make like to pop in here. PS, the yoghurt flatbreads are a must. Super easy and versatile.